A School of change 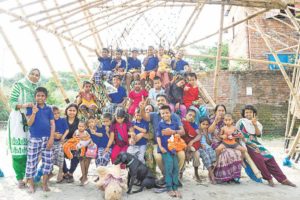 Children of LEEDO with their care-givers or their mothers, as they affectionately call them. Photo: Akib abdullah
Rasmia Rahman Amreen
Local Education and Economic Development Organisation, in short LEEDO, began operating in 2000.This charity organisation’s main aim is to protect and bring back into the mainstream community highly vulnerable underprivileged children, whose lives are being shattered by poverty, domination, exclusion, abuse and conflicts. It also works to provide suitable opportunities for the betterment of these children’s future.

The plight of underprivileged children is something that changed the course of Mr Murshida Kanta’s life, one of the founders. “I have always had a privileged life, where my parents met all my needs. When I was in my early 30s, seeing young souls succumb to poverty, abuse, and drugs made me decided that I will spend the rest of my life working to make a difference to the lives of as many children as I can,” she says. “Drawing inspiration from my late elder sister, Advocate Rashida, I decided long back that if Mother Teresa can dedicate her entire life for the betterment of people, I too would shape my life accordingly.”

LEEDO Peace Home is an attempt taken by the organisation to rehabilitate children left on the streets and disowned by their families. It can accommodate 50 children. Currently, Peace Home holds 45 underprivileged children of whom 18 are special children. It even hosts a 12-year-old special child along with her a year and half old son who was left on the streets by her family while 5 months pregnant. “After finding her, we gave her shelter in our home and nursed her. Once she gave birth, I was the first one to hold the baby in my arms,” recalls Ms Kanta, with tears twinkling in the corners of her eyes.

Other initiatives taken by LEEDO also include Rescue from Street, Transitional Shelter SETU, School Under the Sky, Mobile School and more. School Under the Sky runs informal schools conducted in areas where underprivileged children are concentrated, such as train and bus stations, market areas and launch terminals. Mobile School is an innovative project that educates and makes underprivileged children aware of how to keep safe and develop a goal for life. The education system is based on games and entertainment. Mobile schools are also a means of rescuing children.

“After waking up and brushing teeth, each day starts with PT at 7:10 am. After breakfast, the children attend schools and come back by noon. Once back to their home, the children get done with their home-works. After shower, we feed lunch. Next, one after another, the English, Math, Religion, Music and Dance volunteer tutors start to arrive. We also arrange for piano, karate and swimming lessons,” says Tania, one of the care givers. “At 9pm, dinner is served. Afterwards, we spend time together until 11pm. After drinking a glass of milk, it is now their bedtime,” adds Bulu.

Mr. Forhad Hossain, the executive director of LEEDO, says, “It all began with a sudden epiphany while walking on the streets one night, some 25 years back. While observing the children left alone, I thought to myself that whether I could come of some use to ease their lives. Initially, I would leave food for them to eat and try to educate them on the streets. However, I soon realised that it would not be enough. With the generous help from a British couple, the Liz and Carl family, we were enabled to build LEEDO Peace School. They also host 25 of our children.”

LEEDO is harboring dreams Mother Teresa might have dreamt when alive. While they serve silently to the nation without asking for anything in return, they are shaping the future where perhaps one day, no more children would have to suffer.