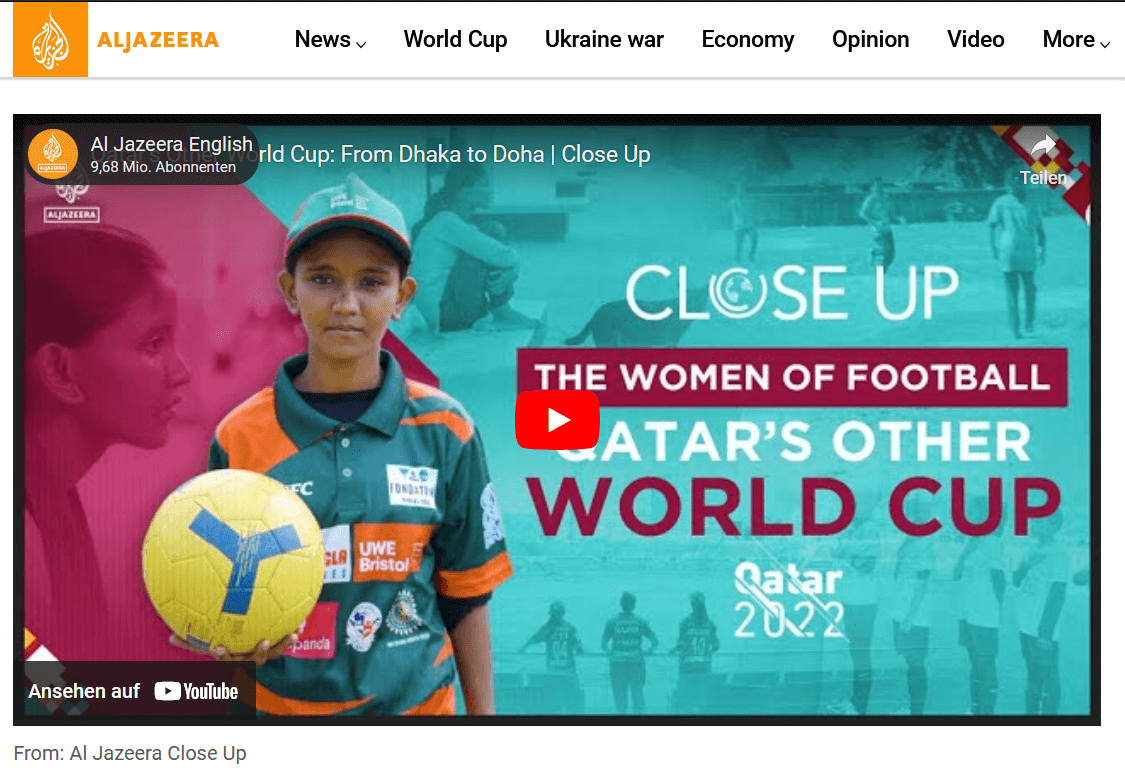 The UK charity will partner with Qatar Foundation (QF) to hold the fourth SCWC 2022 at Education City between 3-14 October.

Street Child United aims to utilise the power of sports, in particular international sports events, to alter the “negative perceptions and treatment” of street children who come from less advantaged backgrounds.

“Our mission is to tackle the widespread stigma street-connected children face and raise awareness and understanding of their situation, so they are protected, respected and supported to realise their fullest potential,” the charity says.

A total of 26 teams representing 22 countries, including Qatar, will participate at the next SCWC international football tournament in Doha.

For the first time in the Middle East, the 10-day event taking place in Doha will welcome 13 girls and 13 boys teams that will come together to raise their voice in a sports initiative with a humanitarian spirit.

Qatar will be the first Arab and Middle Eastern country to host the global movement which unites street children from five continents ahead of the FIFA World Cup.

The initial aim is to give street children from all over the world a platform where their voices can be heard clearly, allowing for their struggles to be addressed adequately.

“With everything the world has been through these past few years, we need positive, meaningful, heroic stories, and every SCWC delivers them in abundance,” Street Child United (SCU) co-founder and CEO John Wroe said in a statement.

“We are so grateful to Qatar Foundation for supporting us in hosting this event and putting a spotlight on these inspiring young people so they can tell the world ‘I AM SOMEBODY’.”

The event coincides with the FIFA World Cup 2022, which is also taking place in Qatar

“Through the SCWC, SCU are providing the support and safety that is crucial for children who are not often given an opportunity like this to come together, enjoy the fun and freedom, and form meaningful friendships that are embodied in sports events.”

This week, the Gulf state received team leaders of the participating organisations for the SCWC Summit, in preparation for next year’s big event.

“Over the course of four days, team leaders will gain first-hand experience of Qatari hospitality and culture, tour Doha and Education City, participate in a number of workshops, and visit several schools, including one of the Eco-schools run by Qatar Foundation’s Qatar Green Building Council, where they will learn more about sustainability and the positive actions that can transform behaviours in communities,” SCU stated.

During their visit, team leaders are expected to attend QF’s WISE 2021 summit taking place in Qatar from 7 till 9 December under the theme ‘Generation Unmute – Reclaiming our future through education’.

SCU is scheduled to host a session at the summit with particular focus on facilitating access to education for all street kids.

“By representing my country and taking part in the SCWC, I returned to my community a hero. I am now a leader in my community, helping to inspire the next generation through a local football academy,” said Sadock John, a young leader from Tanzania, who played at the first SCWC in 2010 and joined the SCU team.

“Among the 26 teams, 10 will be participating at a SCWC for the first time, including three refugee teams – Darfur, Hungary and Zaatari – plus a girls team from Palestine,” the organisation said.

“Other teams new to the SCU family include: Uganda, Nepal, England, Mexico, Peru and Zimbabwe. They will be joined by teams that have previously participated in at least one SCWC and include teams from: Brazil, India, Bangladesh, Indonesia, Philippines, USA, Burundi, Tanzania, Pakistan, and Mauritius,” it added.

The Women of Football: Qatar’s Other World Cup | Close Up